LAPP is a secure pension plan that offers tremendous value to you as a member. This section is designed to help you understand more about how you and your employer contribute to LAPP so that it's funded in a way that it provides a lifetime pension.

There is a lot of misinformation out there, and this will help you explain to others how you've been saving for your retirement. Read more about how your pension is funded and the difference having a defined benefit (DB) pension makes in helping you achieve your retirement goals.

Myth: Alberta taxpayers are on the hook for LAPP pensions.

Fact: LAPP pensions are not guaranteed by government. They are backed by a pension fund in excess of $50-billion, owned by LAPP members and invested on their behalf.

Myth: The Government of Alberta holds the risk for LAPP pensions.

Fact: Government amended pension legislation in the 90s, absolving itself of all funding responsibility for LAPP. In exchange, it promised to turn control of the Plan over to LAPP sponsors (the employers and employees who pay for it). LAPP sponsors have been waiting 25 years for governance reform.

Fact: A LAPP pension is based on years of service (the number of years a member contributes to his pension) and a member’s highest average salary (the five years in a row where the member’s average salary was the highest). The longer a member pays, the higher the pension.

Fact: LAPP members pay for their own pensions. Members contribute between 10% and 12% of their income, every month, throughout their entire career with a LAPP employer.

Fact: LAPP employers also contribute to employee pensions, at a rate 1% higher than employees. The employer contribution is part of the employee’s total compensation package. Benefit packages, which also include things like health benefits, dental benefits and life insurance are offered by employers to improve workforce recruitment and retention.

Myth: Defined benefit (DB) pension plans are pyramid schemes where people working today are contributing to cover the cost of pensions owed to those retired.

Fact: For every dollar paid out in pensions in 2017, about 90 cents came from investment revenues.

Fact: LAPP pensions are paid based on a formula that takes into account a member’s highest average salary and the number of years of pensionable service in the Plan. All contributions are pooled into a large investment fund that earns income used to pay out retirement benefits.

Myth: Alberta taxpayers’ defined benefit (DB) pension plans benefit only public sector workers and are a drain on others.

Fact: Large DB Plans like LAPP help fuel the economy of Canada through billions of dollars in investment activity on an annual basis, which supports business, creates jobs and provides retirement incomes to seniors so they do not have to live off government programs.

Myth: When LAPP contribution rates go down, it will affect my future pension benefit.

Fact: No. The rate reduction means it will cost members and employers less for the same level of pension benefit because a LAPP pension is based on a set DB formula that has always been used to calculate members’ lifetime pensions.

Myth: If I leave my employer, I will lose my LAPP pension.

Fact: No. If you are vested and leave your employer, you will have the option to leave the pension benefit you have earned with LAPP in the Plan. At age 55, you are eligible to receive a LAPP pension for the rest of your life.

If you later take a job with one of the 415+ LAPP employers who participate in the Plan, you will be able to add new pensionable service to what you have earned and increase the lifetime pension you will receive.

Myth: My pension will be lost if I die before retirement.

Fact: LAPP has very specific rules around what happens to your pension in this circumstance. If you are vested and pass away before retirement, and if you have a spouse or partner, he or she will have the choice of immediately starting a monthly LAPP pension for life or receiving a one-time payment based on the commuted value of the pension. If you do not have a spouse or partner, your chosen beneficiaries will be entitled to receive the one-time payment of the commuted value of the pension.

Watch our LAPP members confront common myths about the Plan and inform others about the facts.

You owe it to yourself to skip the water cooler advice about important topics like your pension. 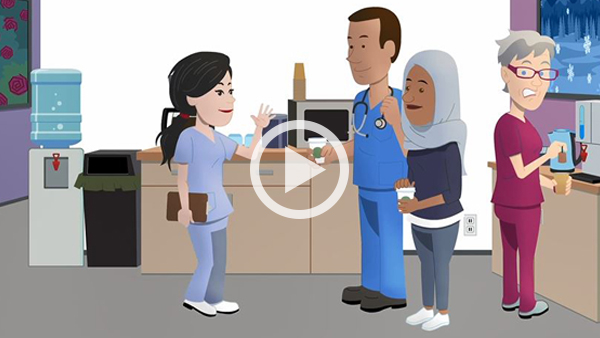 Bob has opinions about Jerry's LAPP pension that aren't based on facts. Watch as Jerry clears things up and explains how his pension is funded.