Markets
As the first quarter of 2020 has shown, the COVID-19 pandemic has had a major impact on global and Canadian economies.
The markets experienced extreme levels of volatility in March, something the world has not seen for many decades. As a result, all asset classes experienced increased volatility and repricing.

The crisis arrived after the longest bull market in recent memory. Although COVID-19 is the most significant driver of the downturn, some experts argue the pandemic only accelerated the onset of an inevitable crisis that was already indicated by several economic and market factors including corporate indebtedness, a slowdown in manufacturing output, an inverted US yield curve and elevated asset valuations.

After several harrowing down days in the market that ranked among the worst in modern history, markets experienced a significant rebound in the last days of March in response to the strong policy actions initiated by governments and central banks around the world.

The scale and range of the stimulus introduced by the US Federal Reserve was larger than that of 2008. Trillions of dollars have been pledged as at the time of writing, and more is expected by the end of the year. Other countries followed the US with significant responses. The Bank of Canada, for instance, lowered its policy overnight interest rate to 0.25% and has initiated large bond purchase programs (i.e., quantitative easing) in order to support the Canadian economy and financial system. Notably, the Bank of Canada did not engage in quantitative easing after the 2008 financial crisis, which underscores the gravity of current circumstances.

The benchmark for global equities, the MSCI World Index, in Canadian dollars, returned -13.34% in Q1.

Canadian equities also suffered, due in part to the Saudi-Russian oil price war, and the S&P/TSX Composite Index, which has relatively high exposure to the energy sector, returned -20.90% as of the end of the first quarter.

Asset classes that traditionally experience lower volatility levels also experienced repricing due to the all-encompassing nature of the current crisis. For example, the Canadian real estate market as represented by the IPD Large Institutional All Property Index returned -0.76% for the quarter. Looking forward, further write-downs can be expected in upcoming valuations of real estate, private equity, and infrastructure assets. 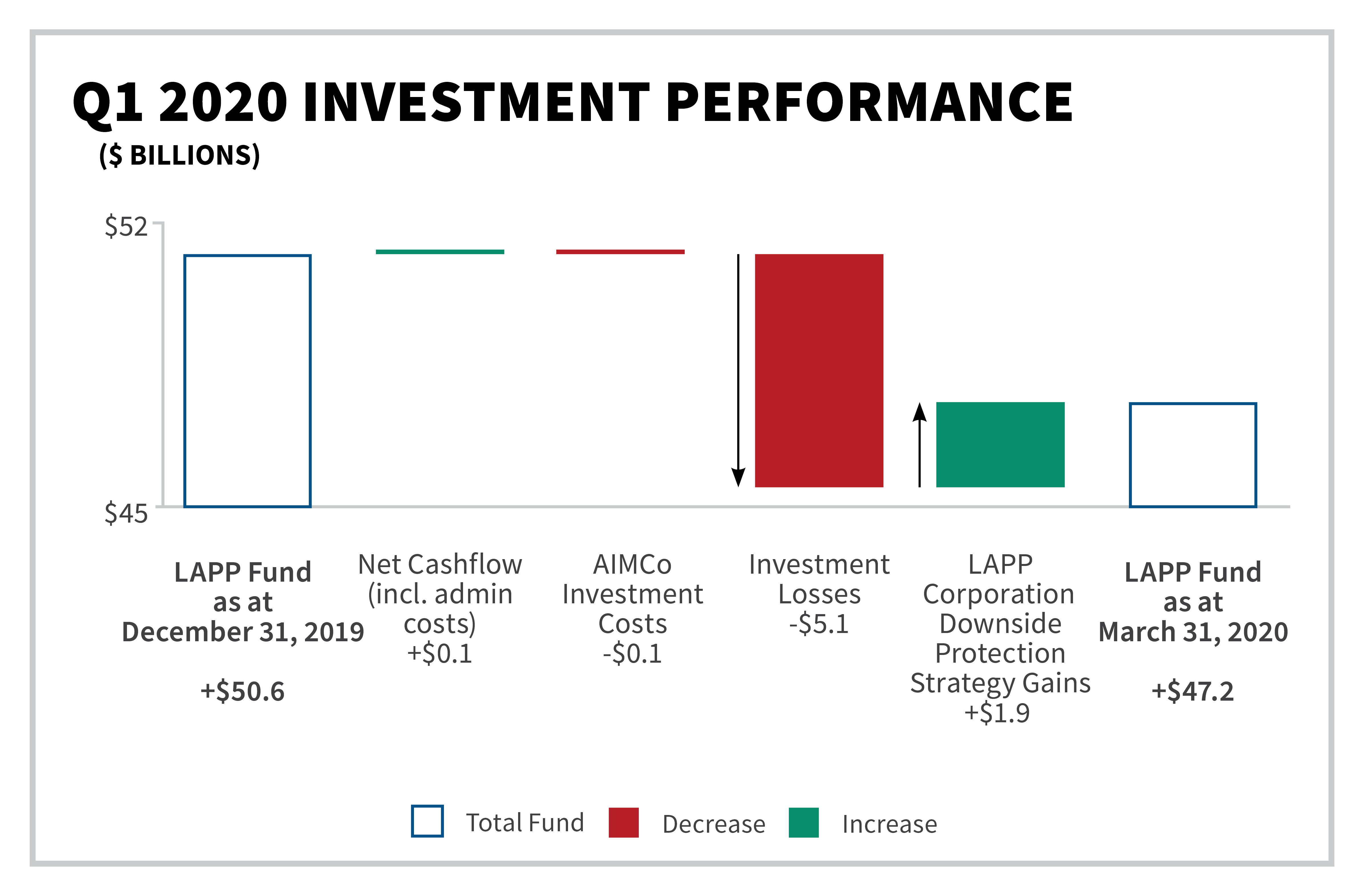 In Q1, the Plan’s fund returned -6.54%. The policy benchmark return of -5.27% reflected the downturn in capital markets. “Active management by AIMCo detracted -4.96% from performance, -1.83% of which is attributable to a volatility trading strategy (VOLTS). However, LAPP’s portfolio returns for the quarter were materially improved by the LAPP downside protection strategy (DPS), which added 3.61% ($1.9 billion) to the fund’s return as of the end of Q1. In other words, without LAPP’s strategy, the portfolio would have returned -10.15% for the quarter. 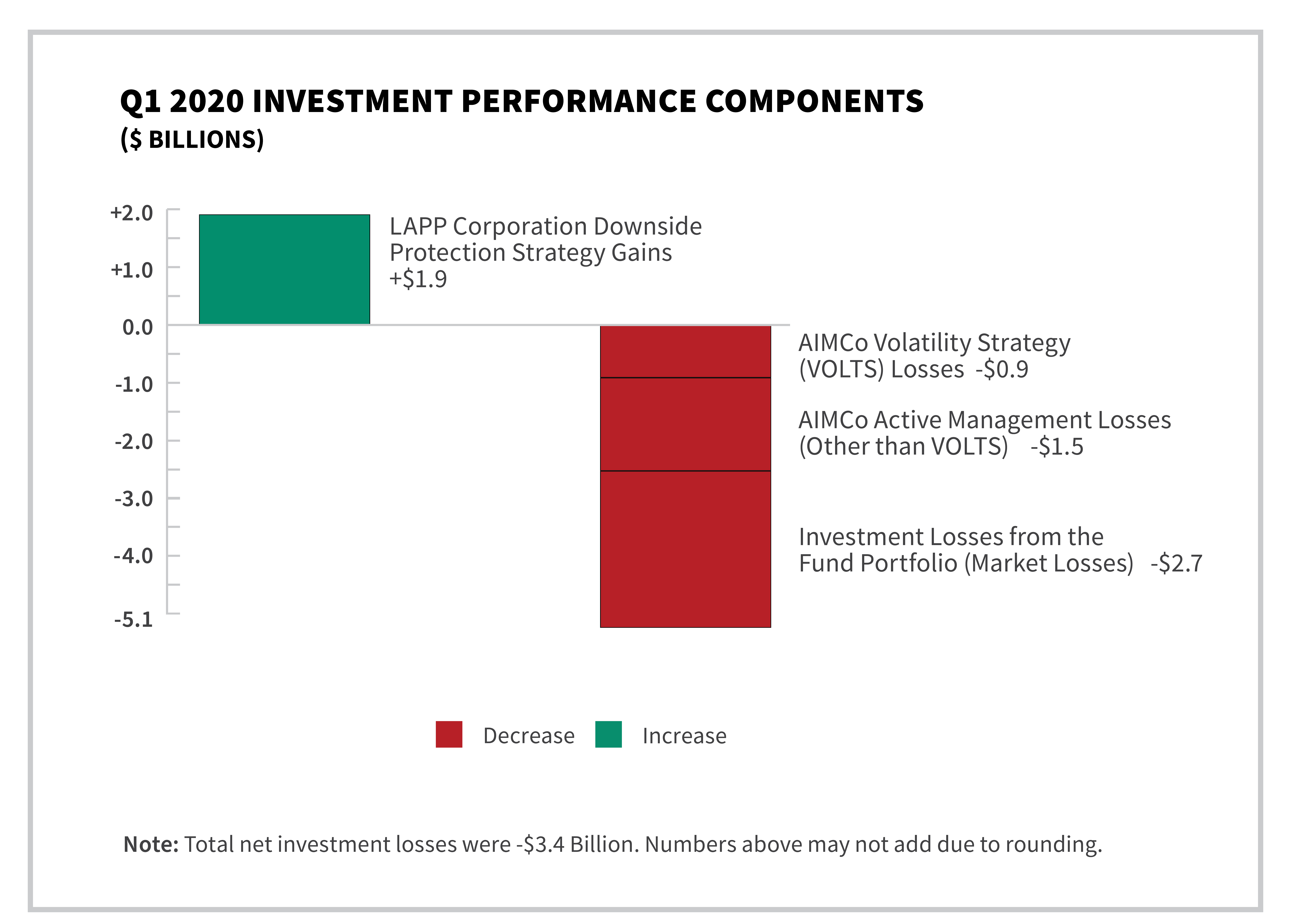 The public equities (stock market) portfolio returned -24.08% for the quarter versus a policy benchmark (index) return for the public equities asset class of -16.48%. A significant portion of the underperformance was a result of losses in AIMCo’s volatility trading strategy (VOLTS) that has generated attention in the press. Another aspect of AIMCo’s portfolio strategy contributing to underperformance relative to the benchmark was an overweight in value stocks while the value factor underperformed.

The fixed income (bond) portfolio returned +0.22% for the quarter versus a policy benchmark (index) return for the fixed income asset class of +1.74%. AIMCo underperformed benchmarks in money market, universe bonds, long bonds, and private debt and loan mandates; only private mortgages exceeded its benchmark for the quarter. For fixed income investors, a very challenging liquidity environment prompted an unprecedented level of central bank intervention in fixed income markets and a “flight to safety” towards government bonds, the latter of which is typical in times of market turbulence. AIMCo’s relative overweight exposure to corporate credit versus government bonds in this environment caused mark-to-market (paper) losses, thereby detracting from performance.

The real estate portfolio returned -4.10% for the quarter versus a policy benchmark return for the real estate asset class of +1.83%. The economic impact of the COVID-19 pandemic has reverberated throughout both the Canadian and foreign real estate sectors. Although the full impact of valuations on real estate assets in LAPP’s portfolio may also not become clear for several quarters, it can be expected that retail (shopping mall) properties, due to social distancing measures, and Alberta-based real estate, due to the utter collapse of global oil prices in Q1, will be most vulnerable to re-pricing in the upcoming months. Also, the Canadian real estate benchmark does not reflect the extent of repricing in the market.